On the second day of POM was held TrailO, which was this year's first race for me. In Portugal, to my knowledge has not been too much activity in this discipline, I think, they "train" to European Championships 2014.
The terrain was an excellent choice, the competition took place at Fontelo Park in Viseu. I have already indicated in article of Compass (hungarian orienteering newspaper) that it was not good for recognize the Portuguese map makers or course setters, because they delegated this task to Remo Madella from Italy. (Maybe they will seek outside help for ETOC too?)
I was surprised how serious and technically race Remo organized, I thought it will be just a demonstration. This compares with there were 75! competitors.

Was a good idea placed two points to practicing before the start, where new visitors appear, there is very helpful. We also held a briefing for our trailo beginners :)

At the registration Remo said he is confident my good result, because it will be feedback about quality of the course - I would thank you for your confidence, but so I am not infallible. As it proved later :) I was not really tune, I was not ready for it, because basically I'm on vacation.

I really liked the course and the map, I took photos and I try to write an analysis: 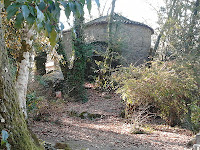 1. As we looked north-east of the flags the good flag should have been on the closer rock's NE side. There was (the right side of image) is a large stone ball, but the bush is covered, but the flags were on other rocks.
2. It was a good task, because the rock face did not seem nowhere, hiding in the ditch. But could walk around, settled the distance between the trail and two flags, and measured the distance from the south-west footpath junction.
Unfortunately I have not pictures (maybe Mihók - Zoltán Miháczi - has). Both Z was good (though not easily visible) and the flags were clearly not on the edge of the depression  and in the ditch. 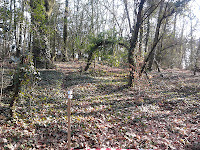 5. Again same flags belonged to two tasks. The identification was very difficult because of vegetation, the walking path wasn't visible . Still, if you measured the viewing point's location, flag C was the correct direction and distance, seemed to be around 35 meters. The small hollow was also suspected - under the curved tree (on the photo). 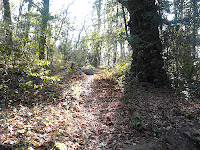 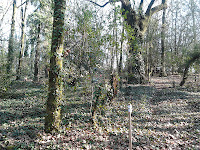 6. I need a little less time to do this. Walking further the road and seeing the path seemed that only flag A can be considered. We could imagine the walking path, the flag was at a nice open area - and Z solution wasn't fair in this situation.

7-8. There was difficult to sight (and shot) that had to look into the dense forest, the sun was shining face. But it was not too difficult if you detected the rocks on the map and the terrain - seemed one flag was in good and one bad place. 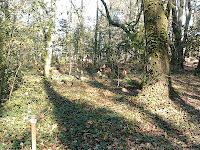 9. I do not like this control because I did not see even with glasses the depression and the gully - and do not see in the photo. They were there sure, because others saw them... At fence corner I recognized that both of flags had good distance from fence. At viewing point (road junction) I looked flag A on better direction, but the difference was not sufficient. Afterwards I realized my fault: I did not go on the norther path well enough, then maybe I would see more? 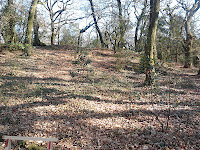 10. There were two possible flags (A-B) quite definitely located on the terrain and the path was located good for B. 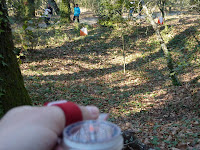 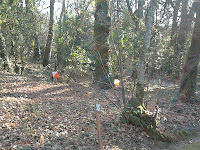 11. The most controversial control. We think the placement of flags was unfortunate, possibly because of depression mapping was not correct. On the south road was observed two things: the higher flag can not be at the edge of depression's contour line, because it's too high. The southern edge of depression, which is drawable with a continuous contour was much deeper. The other thing is direction - as the picture shows, at the south side of depression seemed the left side flag on the northern edge. Zoli and I both selected this one.
The course setter inform me after the race about his solution plan. As IOF Technical Guidelines suggest he hoped that competitors use ‘tangent’ method to help identify compass directions. This is bringing a line, set at 90 degrees to the required direction, towards the feature. The point at which first contact is made is the furthermost in that direction. 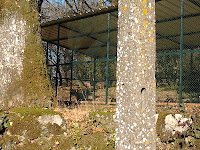 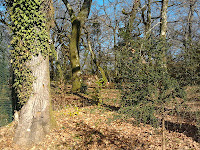 12. I spent a lot of time here. It was easy to find the line between fence corner and knoll (seemed rock) - both of flags were on this line. But which one is good? I looked at several fixed points the direction and I decided the wrong solution. Yet the picture below also suggests that behind the B flag is the small building, which, unfortunately, missed the part of map, but it was there. Of course, I could not zoom on the race... 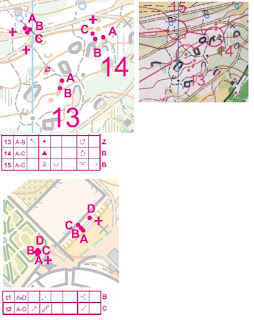 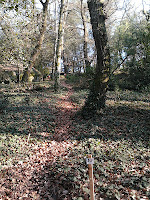 13. Although the searched knoll did not seem well, the estimated distance and the big rock on the other side of path  showed that the flags were in the wrong place,  a lot higher. 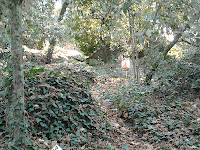 14. It is also in dense forest. The course setter used a trick because appointed one flag (C) to an unmapped rock and the mapped objects were not easy to identify too. 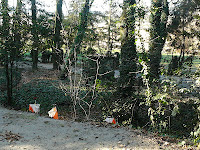 15. The pit and the well (corner house) line only one flag was, although I could be thinking because of the flag's proximity.

The end of the course came time controls:

T1 task was findin the western corner of the stairs, on T2 is probably the east side of path junction, but Ican not remember. Flower beds and small hedges made a joke with me: I missed this control. You know the feeling, as soon as you said the wrong answer, you realize immediately that you were crazy :)

Because of the large number of competitors there are just 30 seconds the time limit and the penalty - which is a good idea for organizers, but reduced the weight of the time controls in the result.
The course was great! My result not going to write the press, but luckily Toncsi (Antonia Holper, TTE) saved our honor. She made 16 points​​, and only 10 seconds past behind Ruud Braten (IFK Goteborg). Third place Tomas Sochor from Czech (15 points). Zoltán Miháczi run with his usual speed (13 seconds), but finished on the 5. place because of his timed controll fault . 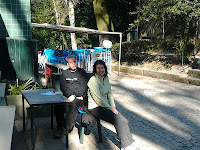 I really liked the clear marking of prohibited roads  and the correct information before start what we got hands on it. We miss the solution map after the race, although we know what kind of problem is for organizers. I am sorry that I did not see what was the "adapted orienteering" at another park of the city.
dátum: kedd, április 03, 2012